What Is Difference Between Hinduism And Buddhism? 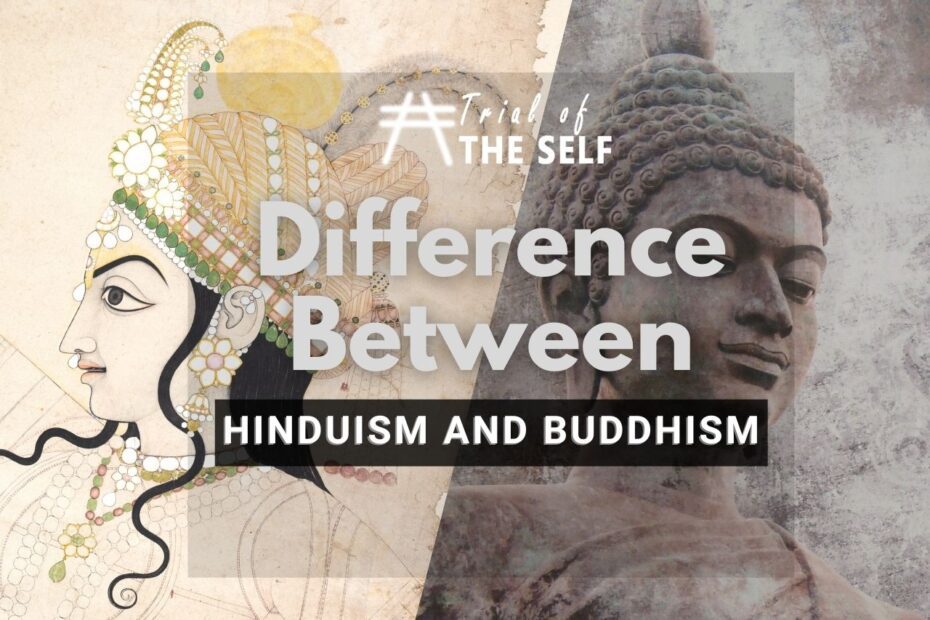 Difference between Hinduism and Buddhism, both the religions are greatest religions of the east. Hindusim which is the root of all dharmic religions existed for time immemorial and then came Buddhism which is the teachings of the Lord Buddha and spread whole of the Eastern part of the world. This article not only tells about the difference but the things which are common between the two easter religions.

Hinduism is an ancient old religion. To be precise the followers of Hinduism do not call it a religion but a way of life, a path that one chooses, which is called dharma. Also known by its name as Sanatan Dharma, which is taught by way of the Saints/ Rishis. However, Hinduism is the third largest religion in the world, with a follower of 1.6 billion on this planet and India being its centre, where the majority of the Hindu population exists. India is the origin of Hindu dharma and it also contains the largest number of Hindus in the world with a population of 1.35 billion.

The teachings of Hinduism are largely based on Four Vedas which are considered from the time the universe came into existence.

Hinduism is an ancient religion, it does not have any system of beliefs. The teaching is passed through an ancient guru shishya custom. It is represented by the symbol Aum, which has a fascinating meaning hidden inside it.

The followers of the religion have 1.5 billion gods to worship and it is a polytheistic religion. Neither the religion has a central authority like the Pope in the Vatican for Roman Catholics nor does it have any one holy book but multiple scriptures with various doctrines and philosophies, such as the mahavakyas from the Upanishads.

Hinduism is a way of life.

Buddhism is another dharmic religion that originated in India and has spread all across the globe. The religion is considered as the religion of the east which did originate from India but spread widely to the eastern part of the globe to its farthest reach at Japan. The religion has its origin which is around 500 BCE by, its founder Gautama the Buddha, who after long penance and practice developed a practice which is known as Buddhism.

The teachings of the Buddha are about one knowing the Four Nobles Truths. The Truths focuses on the suffering, its causes and its eradication from one’s life. The Buddha further taught about the Noble Eight Fold Path to his students, which guides one to realizing the Four Noble Truths.

Buddhism revolves around the teachings of its founder and its practices prescribed by the Buddhist Councils. The path of the buddha and his enlightenment is the path that is taught in this religion. The teachings further include guidance to live a life with virtue. It consists of non-violence, no stealing and always being compassionate to everyone.

Buddhism is the 4th largest religion in the world and its large portion of population lives in East Asia, i.e, China, Vietnam, Thailand, Myanmar, Cambodia and Japan. These nations have their majority religion as Buddhism but follow with a fair amount of difference in them.

Also Read: Why Spirituality Must Be Taught?

The Difference Between Hinduism and Buddhism

Yes, both religions have the concept of rebirth where a soul does not die once but has multiple lifetimes till all his defilements are eradicated. In Hinduism, one has to go adhere to the formal path of Purushartha that is, after following the rights and duties of his life, one must seek refuge in an ascetic life and search for moksha. Moksha can only be achieved by following extensive meditation practice and finding its original soul or the Paramatma. The person in search of Paramatma is said to have achieved Moksha in his life.

The concept of moksha is the same as saving a drop of water from drying up.

Similarly, in Buddhism by practising Noble Eight Fold Path and realizing the Four Noble Truths one escapes the cycle of life, death and rebirth. All defilements in the person are removed and are set to have achieved Nirvana. Although, Nirvana or Nibbana (in Pali), is described as one’s consciousness fades into nothingness.

Buddhism does not adhere to the concept of Atma or the Eternal Self. It considers in the eradication of the self where with right practice the “I” part of a person gets dissolved and experiences nothingness or Nibbana.

With moksha and nirvana is attached the concept of Brahman and Nothingness.

In Hinduism, a man seeking moksha, after going through all the penance and austerities is to have a sakshatkar with Brahaman. In Hinduism, the Brahman is the supreme entity it is the all prevading and existent brahman. All living and non-living, the material world as well as the spiritual domain exist in the Brahaman. The Brahman never dies and it is present everywhere, nothing can escape it and neither does everyone have the knowledge of Brahman. The vastness of the knowledge is achieved to the human being just by knowing the Brahman.

On the other hand, Buddhism teaches nothingness after Nirvana or Nibbhana. The person after going through extreme penance and meditation of the mind, experiences Nibbhana. It is said when, Nibbhana is achieved, all the entanglements and doubts in the mind are cleared the person experiences true peace in the mind without any attachment. When the mind is free from attachment, the person does not experience suffering and is in freedom.

Hinduism has thousands of scriptures that are generally divided into different sects such as Vaishnavas, Shaivism and Shaktism. All these three sects are in addition to the central core teachings of Moksha and Brahman. All three sects are different in choice of deity with which the path beings.

For Vaishnavas, Lord Vishnu is the central deity and the teachings of Lord Krishna and Lord Ram in which the whole teachings revolve. Within Vishanvas also consist of Vedanta philosophy. In Shaivism, the central deity is Lord Shiva and his doctrines which have been a base for Kashmiri Shaivism which include its highest book, i.e., the Shiva Sutra. Lastly, the Shaktisim, in which the central deity is Lord Shakti which is considered the source of energy for all deities in the universe. Lord Shakti is highly venerated in Eastern parts of India and with the advent of teachings of Swami Vivekanand and his guru Shri Ramkrishna Paramhansa, Shaktism has become quite popular.

However, after 500 years from the Parinibbhana or the death of Lord Buddha, the Sangha established by the Buddha was divided and at present, there are only three sects, i.e., the Theravada, Mahayana and Vajrayana. All three have chosen a different path to Nirvana. Theravada is considered as the orthodox school of Buddhism which claims to teach the same teachings that were decided during the First three councils of Buddist. Whereas, Mahayanas have a different approach to Nirvana, wherein it is considered rebirth until all beings are eradicated from suffering and experiencing Nirvana. The Vajrayana are the third and newest of all sects, it is an extension of Mahayana and considers enlightenment takes a lot of time, thereby, using Tantric techniques it claims that one can achieve Nirvana in one lifetime. Vajrayana is also considered Tantric Buddhism.

Also Read: What Is The Meaning Of Aum or Om?

Another core difference in teaching between Buddhism and Hinduism is that Hinduism accepts the concept of the soul or the self. The soul in the teachings of Vedanta Hinduism is that all beings are a part of the supreme Paramatama or Brahma which is the supreme of all. The soul is the part of Paramatma, thereby, if a person by good deeds and by practising penance, his soul will meet and be submerged in the ocean of parmatama. It is like in an ocean a drop of water has fallen.

Similarly, rather than with some difference, Buddhism never accepted the concept of the soul. The basic teachings of Buddhism, it considers, the soul as an ego, whereby, a person gets attached to himself. Buddhism heavily opposes the concept of soul, it directly relates it to ego or self.

Why does Hinduism consider Buddha Dharma As A Part of It?

Hinduism is vast in its domain of knowledge about spirituality and philosophy. At the core of its teaching is the Four Vedas and then the 108 Upanishads, which are considered as ‘Asthik’ part of its philosophies. However, Hinduism also has a Nashik branch, wherein Buddhism is considered as the Nasthik branch. The teachings of Lord Buddha are also considered as Nasthik branch of Hinduism.

Hinduism also considers, Lord Buddha as the 9th Avatara of Vishnu and Buddha is highly praised by the Vaishnav sects of Hinduism. However, Buddist worldwide never accepted the idea that Lord Buddha is the 9th incarnation of Lord Vishnu. It is generally believed that this menace is caused by the Hindus in the Medieval period because a majority of the population of India even the rulers of the time were praising and promoting the teachings of Lord Buddha. For me, if Lord Buddha is Hindu, then it has the freshness of Indianess by labelling Gautama Buddha as an incarnation of Vishnu.

Kind reader if you have come across reading the whole article, going through all the components of it then I believe you can draw your own conclusion about the difference between Hinduism and Buddhism. What I believe, is that these two religions must be read and understood hand in hand, i.e read along with each other. That does not mean you have won’t understand the path but your understanding of the path becomes more clear. It is like you, on a dark road you have two torches and you can use both at any time in your path.

previousWhat Is The Spiritual Meaning Of 1111 Number?
next5 Ways To Find Meaning of Life
Tags:buddhismdharmadifference between hinduism and buddhismhinduismnastik

3 thoughts on “What Is Difference Between Hinduism And Buddhism?”